Baseball season is almost over. Die-hard fans are looking forward to the coming weeks when the division pennant races begin, and the winners face off in a best-of-seven championship series. Major League Baseball’s World Series – played for over 100 years – is slated for late October. This “fall classic” is laden with nostalgia, so it’s a good time to celebrate baseball’s great tradition with a few of the activities suggested bel

Many more activities on the topic of baseball can be found in the resources listed below.

Remember The Golden Age of Baseball? Rekindle fond family memories of America’s favorite pastime with Everyday Life Trivia, Volume 1, featuring hundreds of questions about the ordinary life of Americans in the mid-20th century. Choose from 23 topics, including Books, Dogs and Cats, Hair and Cosmetics, A Kid’s World, Mealtime, Motor Vehicles, Nicknames, Places We All Know, Rooms, Toolbox, Working, and more. The trivia quizzes provide valuable mental stimulation and encourage friendly competition. Many of the questions will spur memories of favorite people, places, and events. Here are some sample questions from the topic “Baseball – Our National Pastime”:

Baseball, motherhood, and apple pie. Get your group in the mood for some old-time American-made memories with a rendition of “Take Me Out to the Ball Game” and other familiar tunes. Use the CD & book set Sing-Along with ElderSong, Volume 1. The disk features 30 old songs in low, singable keys, with vocals. Each song is led by 1-3 singers with simple piano accompaniment. The set includes a compact disk and one large-print lyrics book (with extra books available at quantity discounts). Sing patriotic favorites such as “America, the Beautiful,” “Bicycle Built for Two,” “Hail! Hail! The Gang’s All Here,” “Home on the Range,” “Yankee Doodle Boy,” and “School Days.”

Question: Do you think that America’s national pastime – baseball – has been replaced by football? Offer some topics of special interest to men (such as sports) with Barbers, Cars, and Cigars: Activity Programming for Older Men. Included in this updated resource are eight reminiscing sessions with themes such as “The 1960s,” “The World of Work,” and “Boys and Their Toys.” You’ll also find ideas for games, sports, current events discussions, food, music, service projects and other meaningful experiences. There is a chapter on intergenerational programming as well. Suggested props are listed in the chapters to encourage memories and enliven sessions. Here are some sample discussion questions from the chapter titled “Sports”:

Baseball umpires are called to judge whether a pitch is a strike or a ball. Offer your group some courtroom drama by challenging them to be the “judge” in some provocative, real-life cases.  You Be the Judge: True Stories to Jump-Start Lively Conversations, Volume 1, features 38 true stories, often decided in a court of law. Read, for instance, about the controversy surrounding the final game for baseball’s National League pennant in 1908 in “Baseball’s Greatest Dispute.”  Each case begins with a presentation of the facts, followed by some questions to focus your group’s debate. Which side should win? The real outcome of the case is then provided, along with some discussion questions for further reflection. Cases are brief and easy to follow. There is no right or wrong answer, and no one is required to remember details.

Sample cases in the first volume: California Clown Is Good Samaritan, Man Defends Right to Grow Beard, An Unfortunate Plea, A Dangerous Dog, Sins of a Minister, A Sleep Disorder, A Mess in the Mail, Why Goldfish? Too Close for Neighbors, A Rose by Any Other Name.

Bring the ball game home with a pregame get-together. Energize your group and spark musical memories with the DVD Let’s Sing! Sing Along with Andy Anderson. The disk features 10 nostalgic songs from the 1930s to 1960s. The words to the songs are projected on the screen for singing along. Try these familiar tunes with your group: “Bill Bailey,” “New York, New York,” “That’s Amore,” “The Shadow of Your Smile,” and “Paper Moon.”

(Note: Some of the trivia quiz questions are from the chapter titled “All-Star Athletes” in the ElderSong resource Famous Folks.)

“Never let the fear of striking out get in your way.” ~ Babe Ruth 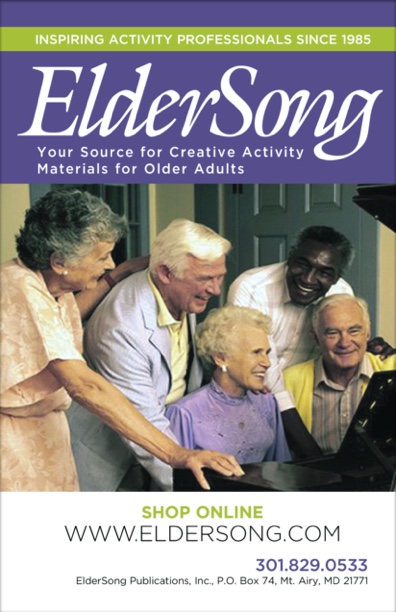