JOURNEY THROUGH THE 20TH CENTURY 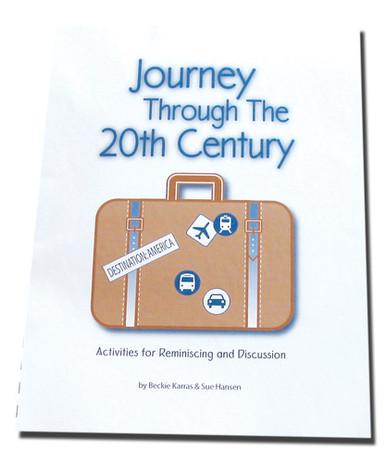 Activities for Reminiscing and Discussion

In Journey Through the 20th Century, celebrate the lives of older adults as you travel back with them to the last century and reflect on life-changing events such as the age of radio, the Great Depression, World War II, the advent of television, the baby boom, rock 'n roll, and more. Simplify your planning time with over 200 detailed activities that focus on the years 1920-1969. You'll find introductory and oral reminiscing activities, small group discussion topics, large group and intergenerational activities, cooking projects, drama and role-playing suggestions, and music activities.

Following the activities for the 1920s, 1930s, 1940s, 1950s, and 1960s are year-by-year historical summaries that include song hits; music and cultural events; fads, fashions, and trends; and news events. You'll be able to explore the years in which your group members lived and help them gain an appreciation of their unique place in history.

Also in Journey Through the 20th Century: A timeline of the entire 20th century, a list of 20th-century U.S. presidents and vice-presidents, and a bibliography and resource list.